We invited twinstantrumsandcoldcoffee for a family day out at Drake Circus and The Barcode, here's what they got up to: 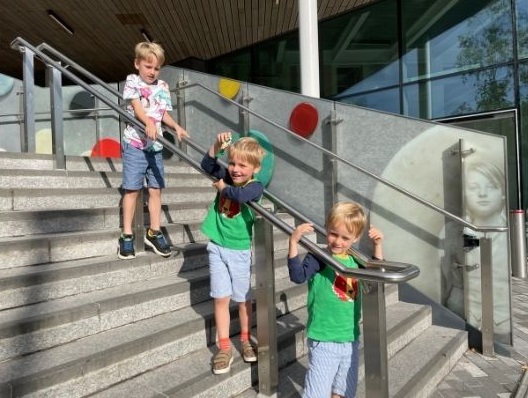 "Have you ever considered a family day out at Drake Circus The Barcode in Plymouth? If not, then think again!

We’ve just taken our three boys and had a great time!

Drake Circus’ Seize The Day campaign encourages local families and those that live further afield to enjoy a day out there this autumn.

So you might be thinking there’s no way you’d want to take your kids to a shopping mall, are they actually crazy? And yes, I may have thought the same thing at first. Shopping with kids isn’t exactly fun, is it?

But remember Drake Circus also has The Barcode which opened in October 2019 (although doesn’t it feel more recent due to all the lockdowns!). And your kids will have a GREAT time there.

Head to both the mall and The Barcode and you can easily have a fun family day out at Drake Circus. And if you don’t believe me. Read on to hear what we got up to.

Our family day out at Drake Circus The Barcode

So for us a family day out needs to have activities. Something for our boys to actually DO. Otherwise, they start being, shall we say, more than a little bit ‘lively’. If you follow my blog and social media, you know exactly what I’m talking about. Especially the twins.

And luckily for us The Barcode has two perfect places for this – the cinema and indoor adventure golf. Throw lunch in the middle and voila, a great family day out at Drake Circus.

We headed into town at about 10ish on a Sunday, and easily parked at The Barcode car park – there is loads of room, and it’s a great alternative to the mall car park. Pay is on exit, so no need to feel tied to time either. You don’t even need to remember not to lose a ticket, as it’s all done on your registration number. Just try to remember that instead!

Cineworld at Drake Circus The Barcode 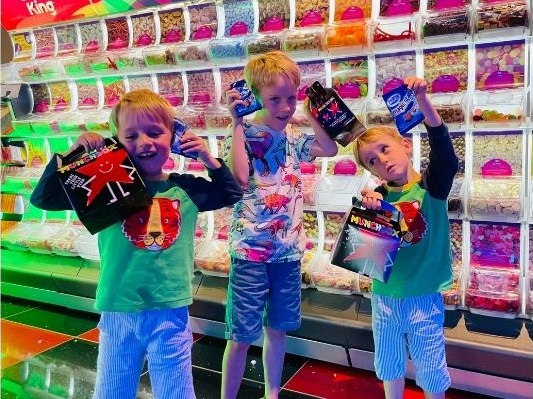 First stop for us was a visit to Cineworld to watch a film. I don’t know about your kids, but my boys LOVE the cinema. They’re movie obsessed – definitely get that from their Dad. So they were super excited to go.

We watched ‘Ainbo: Spirit of the Amazon’. It’s an animated children’s movie about the epic journey of a young hero and her Spirit Guides – a cute and humorous armadillo and a goofy oversized tapir – who embark on a quest to save their home in the Amazon rainforest.

It was one of Cineworld’s weekly Movies for Juniors screenings at the weekend, which meant tickets start from as little as £2.50 for kids and adults alike. I mean, seriously, how amazing is that! They also do a Cineworld Family Ticket for groups of four with up to two adults where adults pay kids prices.

Obviously part of the excitement of going to the cinema is the snacks. Kids are all about the snacks, right?

My three had a Munchbox each which is a cardboard box containing a drink (water or Fruitshoot), popcorn and a sweet treat (Milky Way Magic Stars or raisins). You can guess the choices they all made. And obviously it was pretty much all gone before the film even started.

Mind you, one thing I liked was that there was only one trailer before the film. As much as I like to see what’s coming up, I always think when they show loads it extends the time I’m expecting my boys to keep still (and behave) so it’s good to just get on with it!

Cineworld is for parents of young babies too

Cineworld also offers Cinebabies screenings exclusively for adults and babies. The films are all rated 12A and below, staff will store your pushchair, and provide nappy changing facilities in most locations. The sound is slightly lower and they dim the lights, so you can enjoy your movie with your baby in your arms (hopefully asleep!). Under 18 months go free, so what a great way to catch a film if you normally wouldn’t be able to because of kids?

And if you’re total film-fanatics, then you need to check out Cineworld’s unlimited cinema offer. From £9.99 a month per person you can see as many films as you like, get discount on those all-important snacks, and entry to preview screenings of upcoming releases. Sounds pretty cool, doesn’t it? My Other Half is definitely sold on the idea. So if anyone fancies babysitting? 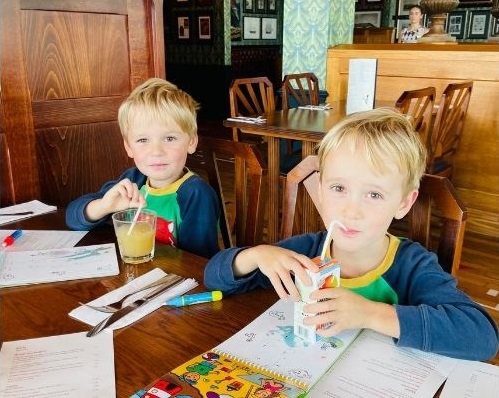 Film done (it was great by the way), then it was lunchtime. And despite all the snacks, my three still had an appetite. There are loads of places to eat and drink to choose from at The Barcode including BrewDog, Five Guys, Nando’s, Zizzi and soon there’ll be Las Iguanas having moved from the Royal William Yard.

But we opted for one of my favourites, Cosy Club. It might not be the first place that pops into your head for kids, but it really should be. There were several tables with children eating, and it’s little wonder. It’s big, spacious, and welcoming, and the kids’ menu was the best I saw in The Barcode.

I’ll be the first to admit eating out isn’t always a pleasant experience with my children. Keeping three boys still whilst they wait for food, stopping them messing around with salt and pepper shakers, straws, spilling drinks or talking nonsense very loudly isn’t exactly enjoyable. I took colouring with me, but gave into the iPad just before the food arrived. I’m totally over people judging me for it as well, these days. We’ve all been there.

However the main reason is because my boys are fussy eaters. But that wasn’t a problem at Cosy Club. The kids menu included chicken goujons, fish fingers, macaroni cheese, burgers, and even veggie stir fry with teriyaki noodles! So choosing what they wanted was easy. Funnily enough they didn’t opt for the veggie stir fry though. There was also a choice of three desserts too, including a healthy fruit bowl. Which my boys avoided in favour of ice cream. Obviously.

The adult menu is huge with brunch, small plates to share, burgers, and main meals. And all the food was delicious. I went for a ‘dirty chicken burger’ – which included my first ever experience of a macaroni cheese pattie! There was so much food I wasn’t hungry again until 10pm that night.

Test out your golf skills at Paradise Island Adventure Golf 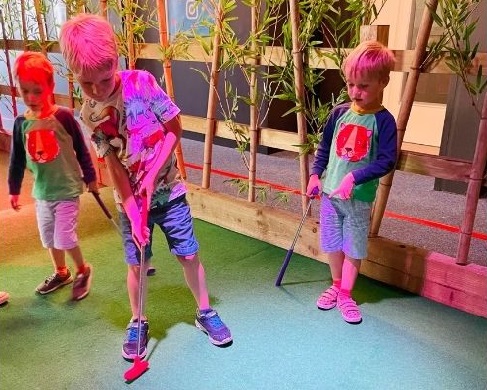 After lunch we wandered down to Paradise Island Adventure Golf which is also in The Barcode. If you’ve not been before, it’s definitely worth a visit. I’d been with my eldest and nephews when it first opened and they loved it. This was the twins’ first time and they had talked about it all week beforehand.

It’s a perfect wet-weather activity to have up your sleeve, and is ideal for families and groups of friends. We saw lots of couples playing too. The centre has two 18 hole Adventure Golf courses spanning a 16,000 sq/ft ‘tropical utopia’ area. You can take on twists, turns, humps and bumps as you explore the treacherous ‘swamps’, then venture onwards through the deadly jungle. You can even win a free game if you get a hole-in-one on the 19th hole. It’s really well decked out, and the boys were seriously taken with the jungle-theme, even making friends with a giant snake.

Twin Two took it very seriously, and was actually pretty good, and the six year old even got a hole-in-one! Whilst Twin One was slightly lacking in concentration, shall we say. Was definitely not the best idea letting them have ice cream just before, but hey, you live and learn, don’t you?

If you’d not already eaten on your family day out at Drake Circus, there’s a new cafe at Paradise Island Adventure Golf called The Bunker. It does burritos, rice bowls and nachos with smaller versions of them on the kids menu, as well as various paninis. There are also eat and play deals where you can have one round of golf and a main meal for £12.50 or £8.50 for children. 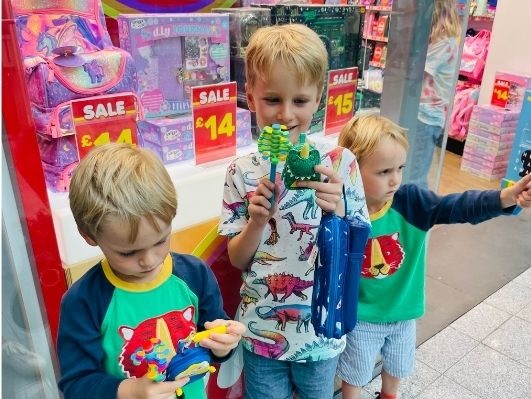 We finished our family day out at Drake Circus by wandering across to the shopping mall. Okay, this might not be the most relaxing shopping experience I’ve ever had, but we weren’t there for my own Joules or Fat Face session (unfortunately). We went to Smiggle on the first floor on the hunt for pencil cases. I’d bought the six year old a hard box one during the holidays, apparently known as a ‘pop-out’. Then three days before the start of term we were sent the list of things it had to contain. Way too much! So that was a waste of time and money!

It was literally like the saying ‘a child in a sweet shop’, except at least all the Smiggle products weren’t about to make them go crazy. (The ice cream had already done that!) The boys didn’t know where to look first. Bags, pencil cases, lunch boxes, water bottles, headphones, toys, pens and pencils. Everything was so bright and appealing for them. It was hilarious to watch.

Friendly and welcoming staff were brilliant with the boys

The two staff members were lovely, asking the boys what they were looking for, recommending different things to look at, and chatting to them. I spend my life telling them not to touch things in shops, but they said they were actively encouraged to get stuck in when you’re at Smiggle.

Once the new pencil case was carefully chosen, the Twins opted for novelty boxing and fidget pens, and mini pen pal notepad keyrings. Which they both took to bed with them, of course. And Twin One was up at 5am looking for. So they were obviously happy with their new purchases! If you were toy shopping with the children, Drake Circus also has The Entertainer and Tiger which would be ideal.

The team at Drake Circus The Barcode challenged us to ‘Seize The Day’ and enjoy a family day out, and we really did. We spent a good six hours at The Barcode and shopping in Drake Circus, and the boys were pooped by the end of it. (What every parent wants, right?) We spent longer than I thought we would there, but proof Drake Circus is a great day out for families. Stick it on your list of places to visit this Autumn." 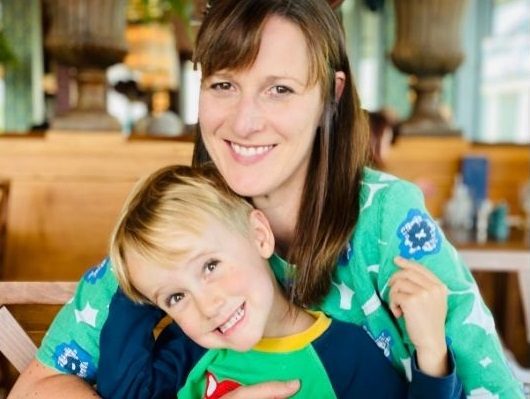